This page is too long and too technically detailed. It should have sections for general problems, which link to other pages with more technical details. --Eric (talk) 16:24, 22 May 2008 (UTC)

Where’s the Retry Button? Not in Advanced View.

I got a message to the effect that there was some difficulty in communicating either with BOINC as a whole, or with one of the three projects which I’d signed up for (after the first two told me they had no work available). I don’t really know how that works, and BOINC is less than informative. Since I knew my connection was okay, at least at the time I was using my computer, I followed directions and went to the advanced view. There was no “Retry” button to be seen. If BOINC wants the widest possible number of computers to be put in the service of science then the software should be as user-friendly as possible. Otherwise, you’ll be limited to a handful of smug and self-satisfied science types who can negotiate the vagaries of your application’s interface.

Hello John, in the advanced view there is an update button which might help (see left side of the picture: Projects > Commands): 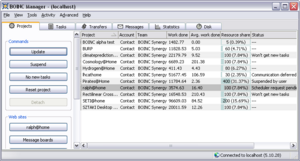 What was the exact message from BOINC ? see also please the tab messages: 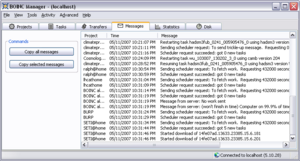 There is no reply button because this isn't a forum.
BOINC has nothing to do with the software behind this wiki. If you think "a reply button would be a good feature", go ask MediaWiki developers (which, btw, is the same software Wikipedia uses). Nicolas (talk) 01:12, 6 April 2009 (UTC)

I think I have the latest update of BOINC; the problem was one cannot simply go to the “Advanced” view; one must also then click the “Transfers” tab. Not a big deal if one has all day to poke around, but a nuisance if you just want to put BOINC on your desktop for whatever good it may accomplish and then go about your busy day. May I suggest, also, that the “Retry” button be placed on the default “Advanced View” window, or that that further detail be added to you pop-up dialogue?

i'm using Ubuntu 9.04. how do i disable autostart? my cooler is not the best one and in summer my CPU becomes to hot causing it to make that annoying "your-cpu-is-to-hot" speaker alarm...

Contrary to what the page says, reporting new bugs is not actually possible even after you sign up for an account with BOINC's Trac installation; the "New Ticket" link isn't there, and attempting to manually load the "new ticket" page results in:

403 Forbidden (TICKET_CREATE privileges are required to perform this operation)

In the meantime, where should we post bugs? here? thx.

Having to close project.

Hello I first began to number crunch for the BBC climate change project. When that project closed I was directed to Bionic. Sadly my old computer is terminally ill. I can't run most of the hardware and only one USB port is responding. In an effort to salvage some data, I'm removing all non-essential tasks- that includes Bionic. I don't know how to inform project managers.

You don't have to do anything. BOINC is prepared for computers quietly going away. By the way, this "talk" page is to discuss the content of the "BOINC help" page, not for people to ask for help. Ask in the forum next time. Nicolas (talk) 00:19, 2 February 2010 (UTC)

I got this probleme... I "fixed it" by deleting the random pass in ~/boinc/gui_rpc_auth.cfg and restarting the deamon...

Can you save the pass phrase in boinc_gui ?